skip to main | skip to sidebar

Yesterday marked the one year Anniversary of the girls' arrival, so I threw them back in the "studio" to commemorate the occasion. (they're a little harder to handle in their full grown state). 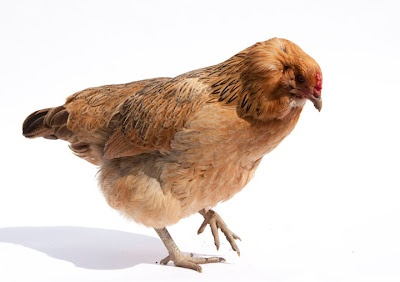 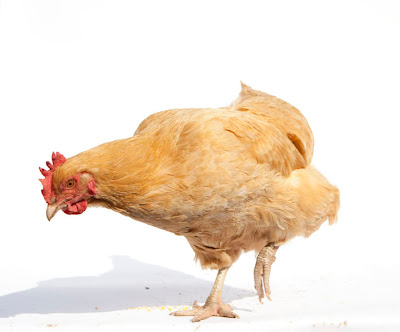 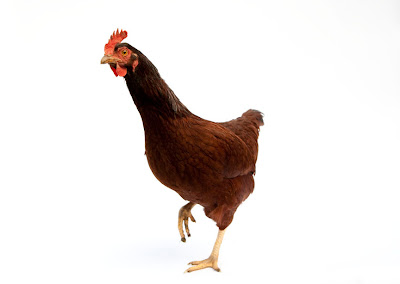 My little girls are ladies now.
Posted by Josh Elliott at 12:44 PM 34 comments:

A Time of Change at le coop 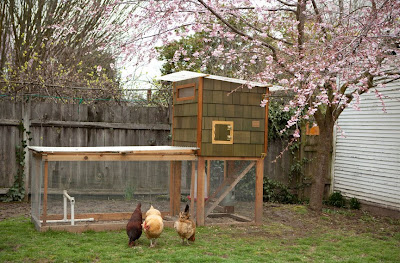 Well, a little warm weather has tricked the flora into blooming around Portland, so I took the opportunity to get a picture of the coop with the cherry blossoms, um, blossoming.
I had to bribe the girls with cheerios to pose in front of the run.

It's been a good winter for them, they're all healthy and laying.
There's still a lot of interest on their part to lay eggs where they want--outside of the next box. So I gave in and made a little pile from all the leaves that had collected at the bottom of the stairs to the basement, right outside my office.
This seems very pleasing to them--especially Noodle Soup--and now it's been 'nested'. I can just open the door, bend down and collect an egg or two.

The big, and not very good news, is that my landlord has put the house on the market, so the girls and I will be needing to move on in the next few months.
Whether my new, and yet to be determined, rental residence is chicken friendly--only time will tell.
I'm hoping to be able to move with them, but I may need to find a new home for them.
If any of you in the Portland area were thinking about getting chickens this year and have a nice free-rangeable yard, let me know.
Wow, that makes me sad to write.

The timer light out in the coop just went out, so it's time to wrap this up.
Posted by Josh Elliott at 7:42 PM 12 comments: 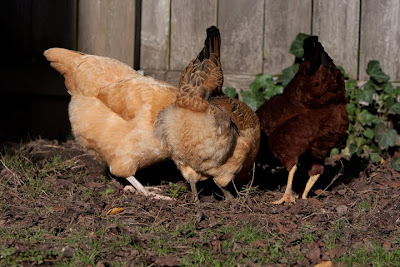 Well, these girls aren't getting eaten on Thursday, so they should be thankful. 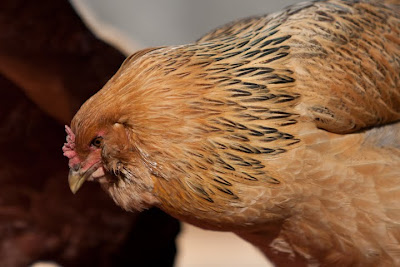 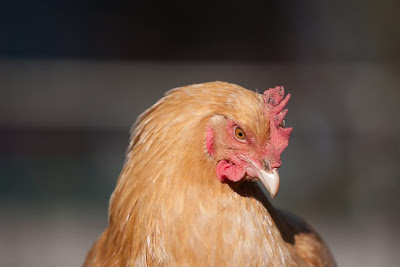 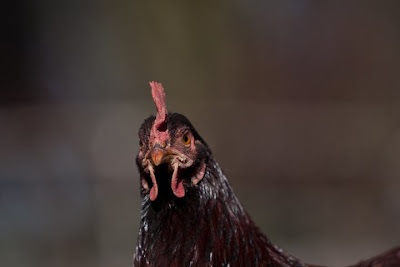 Things have been good for the girls.
They've had quite a few 3 egg days lately . . . though they've been coming up short the last couple days. I'm a little worried Saturday night's power outage, and it's affects on their lighting regiment, may have thrown them off schedule. We shall see.

They eat a lot and hang out in the yard . . . they could leave if they wanted--and they don't so that must mean they're quite happy here. 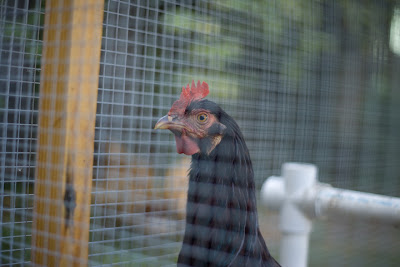 Pot Pie in lock down. 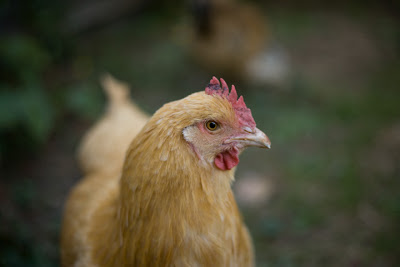 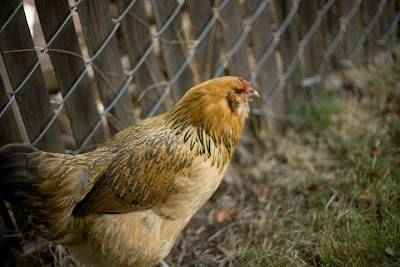 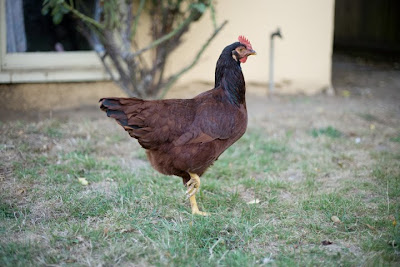 Pot Pie kickin' it old school.
So over the weekend we had a traumatic experience with the girls. A visiting dog got a little excited right up against the run and freaked the girls the eff out.
Somehow Salad Sandwich and Noodle Soup ended up breaking the tips of their beaks off. I'm not sure how it exactly happened--We're just talking about 1/8-1/4 of an inch here--They should grow back. In the mean time eating has been a little sore for them. They've been getting back up to speed, but Saturday was rough for all of us.
So no more new dogs in the backyard.
And they seem happy--chickens are pretty stupid, which helps in situations like this.
On other fronts I ran power out to the coop and rigged up the lights and the timer--we're ready for winter! 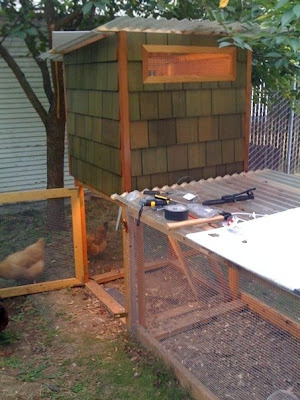 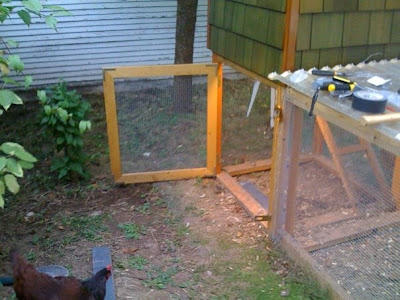 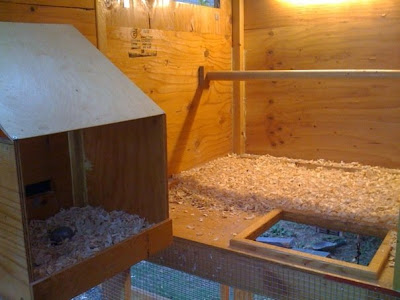 Fake egg in the nest box there--Noodle Soup is sporadically laying, the others seem close . . .
Posted by Josh Elliott at 10:35 AM 6 comments:

A Little Video of the Girls

Check this out over on Youtube, to see it in all it's widescreen glory!

Just shy of five months and Noodle Soup has laid her first egg!
OK, this is actually a picture of the second egg--the first one was smaller and soft and broken, with a big piece of poop on it, not laid in the nest box. That was yesterday . . . 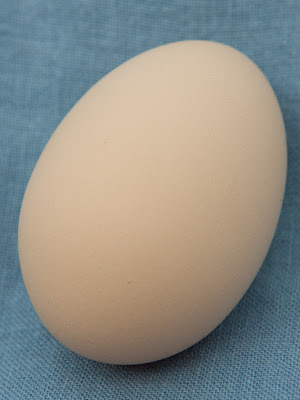 Today she laid this one, which is a little oblong and smallish--both normal things for a first egg--but nice and firm, right in the nest box.
The only problem is that it isn't blue-green, it's tan.
But she's the first layer, so we'll over look that. 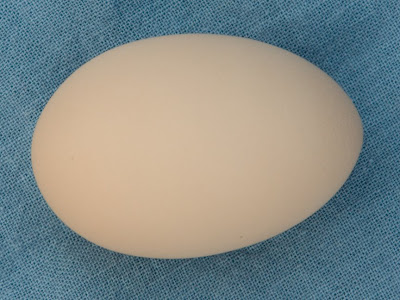 A few days ago she started acting different. She'd go into her getting-mounted-squat when we'd reach down to pet her. And she started hanging out in the coop. Before this week, none of the girls would spend any time at all in the coop while the sun was up.
The roof for the nest box had been one thing I'd put off finishing, so after yesterday's almost-egg, I put on a temporary roof, to make the box a little more cozy and inviting.
And today I stained the permanent roof so it can go on tomorrow.


What else has been going on?
Well, the girls are much bigger than the last photos on here . . . I'll have to get some new photos of them that aren't on my phone.

There have been a couple escapes over the fence, the last one ending with Pot Pie crossing the street and not liking it.
We need to add a couple feet of netting around the top of the fence to keep them in.

And they're all very good girls.
Posted by Josh Elliott at 6:16 PM 13 comments:

Friends of the OC